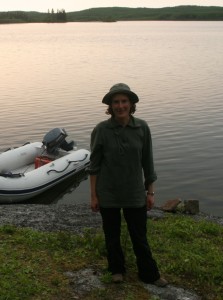 Lucie Debeffe joined the McLoughlin lab of population ecology at the University of Saskatchewan as a post-doctoral fellow in July 2014. Her research focuses on fundamental ecology and evolution using ungulates as model species (Sable Island horses, woodland caribou). First, she will be part of the Sable Island project by studying the social dispersal behaviour of the Sable Island horses. And she will also be part of the Caribou project by studying movement of individual caribou in the Northern Saskatchewan and their interaction with their habitat and natural predators.

After a Master of Science in ecology at the University of Toulouse (France) working on the wolf and fox impact on a two ungulates system in north Apennine (Toscana, Italia), Lucie complete her Ph.D. in the laboratory of Wildlife Behaviour and Ecology (Comportement et Ecologie de la Faune Sauvage CEFS-INRA) in Toulouse under the supervision of Dr Mark Hewison and Dr Richard Bon. Her researches were focused on the dispersal behaviour of a commonly distribute medium size ungulate, the roe deer. This study was individual-based, using the analyses of roe deer GPS locations and behavioural measurements, and aimed to reveal the importance of the inter-individual variation during the three phases of the dispersal process. After her Ph.D. she obtained a post-doctoral position for few months on the University of Lyon1 with Jean-Michel Gaillard and Cécile Vanpé and studied the personality of roe deer using behavioural data recorded during capture in a Swedish population of wild roe deer.